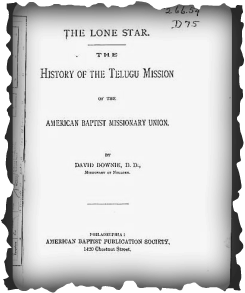 Telugu Baptists constitute one of the largest protestant communities in Andhra Pradesh. They have a distinct history and culture. The mission originated in the coastal Andhra region, and later spread to other parts of the state. Historically, there have been two major strands of this community in Andhra region: American Baptists and Canadian Baptists. Established in Nellore in 1840, the American Baptist mission spread its work to the current Prakasam district and some parts of Guntur and erstwhile Nizam’s dominion, Hyderabad. The Canadian Baptists worked mostly in Godavari districts based in Kakinada. This site will focus primarily on the story of the American Baptist mission and the communiries that it worked with.

Some five years ago, providential as it turned out, I got interested and began reading the history of this community and the work done by the missionaries in this region. I have found this story fascinating to say the least, and actually life-transforming for me. Through this website, I wish to retell this big story spanning some 175 years in the form of smaller stories - easily readable and accessible to a large number of people, both within and outside this community. I am using a wide variety of sources- from missionary accounts to government records to studies by university-based researchers. The community in dfifferent ways has been retelling this story but much of it is in the oral tadition. What I am attempting to do, God willing, is to put it in writing in a systematic way. In order not to interrupt the story-telling, I have refrained from cluttering the stories with references and footnotes. For those who are interested in references and further reading, please go to the references page by clicking on the button "References" above.

Because, the point is to tell the story to as many people as possible.

I do hope that you will enjoy reading them.


go to first story >
Powered by